Call to Action Against White Supremacy and Police Violence

On May 27, 2020, Regis Korchinski-Paquet, a 29-year-old Afro-Indigenous woman, suffered a horrific death during an interaction with Toronto police. Just eight days later, Chantel Moore, an Indigenous woman from Tla-o-qui-aht First Nation, was killed by New Brunswick police during another police interaction, dubiously referred to in the media as a “wellness check.” These devastating incidents are the latest in the countless acts of state violence targeting Black and Indigenous people in Canada, and are part of a broader longstanding history of white-supremacist colonial oppression. These incidents also occur in the context of a long history of fatalities in encounters between police and people experiencing mental distress.

We are outraged and grief-stricken over these egregious injustices, and so many others. To our Black and Indigenous community members: we cry, rage, and stand with you.

As an organization committed to the dismantling of oppressive systems, the Law Union strongly urges its white and non-Black/non-Indigenous members to reflect deeply on privilege, positionality and complacency, and commit to taking action against anti-Black/anti-Indigenous racism and lethal policing of people in mental distress. As Dr. Angela Davis generously teaches us, “In a racist society, it is not enough to be non-racist, we must be antiracist.”

Taking action can take many forms, both short and long term. In the short term, it involves exerting pressure on governments and institutions to take these tragedies seriously, as the details of what happened will not come to light unless we demand them collectively. It involves contacting elected representatives and civil servants to demand transparency and accountability. It could mean attending (safely) a protest. We highlight the demands brought forth by the organizers of the protest in Toronto on May 30th: an independent investigation into the death of Regis Korchinski-Paquet, oversight of the SIU, and charges brought to the officers involved. It could also involve direct economic support for the families of Chantel Moore (https://gf.me/u/x656jt), Regis Korchinski-Paquet (https://gf.me/u/x489am) and/or groups on the front lines fighting for justice for Black and Indigenous peoples, and other peoples of colour (e.g. https://blacklivesmatter.ca/donate/; https://www.blacklegalactioncentre.ca/;
https://www.aboriginallegal.ca/; https://www.tassc.ca/member-agencies.html).

In the long term, crucially, taking action must include an unwavering commitment to the deliberate and constant deepening of one’s understanding of the oppressive structures that systematically privilege whiteness and ableness in our society, and the essential concurrent commitment to rip these structures down at every opportunity. One resource can be found here: https://www.shanisilver.com/home/2020/5/27/anti-racism-resources-for-my-white-friends-amp-readers

Let us take care of each other. Let us transform our anger and grief into solidarity and courage in the fight for Justice and a better world.

The Law Union of Ontario (LUO) – Ontario’s coalition of progressive lawyers, law students, and legal workers – stands in solidarity with land defenders from the Wet’suwet’en nation and their Indigenous and settler allies across Turtle Island. The governments of Canada and British Columbia have failed to respect the national sovereignty and interests of the Wet’suwet’en nation and its peoples’ right to free, prior and informed consent regarding pipeline construction across their territories. In so doing, these governments have ignored and obfuscated critical legal principles pronounced by the Supreme Court of Canada in Delgamuukw v. British Columbia and Tsilhqot’in Nation v. British Columbia, and further failed to comply with their obligations under the United Nations Declaration on the Rights of Indigenous Peoples (UNDRIP).

We stand with the many defenders and protectors of ancestral lands, water, and spiritual, historic, and cultural resources at the Unist’ot’en camp and healing centre and the Gitdumt’en camp along the proposed energy corridor. In January 2019, Royal Canadian Mounted Police brutally and violently assaulted the camps and arrested 14 land defenders. Recently, the RCMP has again invaded and violently removed and arrested land protectors. In fact, Wet’suwet’en matriarchs were holding ceremony for missing and murdered Indigenous women and girls when the RCMP moved in and attacked them. This type of action flies in the face of the calls to justice published after the culmination of national inquiry into MMIW that included recommendations to safeguard and facilitate access to culture and healing. Further, the link between resource extraction and violence against vulnerable community members such as women, girls, trans and two spirit people is well known. When man camps encroach on Indigenous territories they destroy the eco systems and the rates of violence against the local population escalates.

The Wet’suwet’en peoples are leading the fight for the future health of the land and all that occupy it and for future generations, as well as the broader fight around the full meanings of Indigenous sovereignty. The LUO highlights the Wet’suwet’en Hereditary Chief Na’Moks’ statement in response to the proposed pipeline: “This proposed project endangers our promises to our grandchildren that we would look after our land, our culture, our people for them. We cannot break this promise to our grandchildren.”

The Wet’suwet’en Hereditary Chiefs have tried to seek title under the colonial legal system when they were plaintiffs in the Delgamuukw case at the Supreme Court of Canada. After 13 years of court battles the Supreme Court of Canada directed the Canadian government that it had a moral obligation to embark upon good faith negotiations with them. It is not surprising that the Wet’suwet’en leaders seek to have Indigenous law respected since Canadian law has failed them.

The LUO calls on Canada and British Columbia to respect the sovereign territory, rights, and laws of the Wet’suwet’en nation and of all First Nations. We further call upon governments to follow the direction of the Supreme Court of Canada and their obligations under the UNDRIP, the immediate and permanent halt of construction of any pipelines or other invasions of Indigenous lands without free, prior, and informed consent, and to work in good faith to bring all affected parties to the table and seek a negotiated solution.

A conference organized by Legal Aid for All (legalaidforall.net), a working group of the Law Union of Ontario.

Join us as we envision alternative forms of legal practice that support social movements, accessibility of the law, and justice for all – a timely conversation in light of the recent cuts and a neoliberal agenda of “modernization” for legal aid announced by the province. #LegalAidForAll

Suggested registration fee: $20-70 (pay what you can). Students and community members free. No one will be turned away for lack of funds.

The venue is wheelchair-accessible (the accessible entrance is through the back parking lot). Simultaneous transcription will be provided. Childcare will be available. Light refreshments will be served. The conference may be audio-recorded.

In the context of an unjust colonial legal and political system, justice means more than state-funded lawyers representing individuals in courts or tribunals. It requires a challenge to those systems. In this panel we will hear from community organizers experienced in fighting towards a just society. They will share their insights on how lawyers, legal workers and legal aid systems can support the work of social movements in building community power and transforming society. They will also share perspectives on what values should shape radical legal practice, and what approaches and attitudes work or don’t work in empowering communities.

Building a sustainable legal aid system may feel unimaginable due to our current political climate, but it is in our power. It always has been. The first step is to imagine. If we shed the strictures of our current legal aid system, how would we replace it? What tools could we use to make the justice system serve marginalized communities? Join our panel of visionary legal workers as they share their ideal modes of legal aid and legal service delivery, and help them envision how we could get there.

The focus of this panel is addressing the immediate existential threat to Ontario’s legal aid system. We hope to generate an exchange of ideas about what has been done, what is currently being done, and future actions we can take to stop the cuts and prevent further butchery of legal aid. This panel will provide a space for members who work in different sectors and areas of law to collaborate, share information, and draw from each other’s activities to devise new ways forward.

The attendees will also have the opportunity to participate in an interactive photography project intended to facilitate reflection about access to justice throughout the conference.

Resisting Ford: Legal Strategies and Beyond 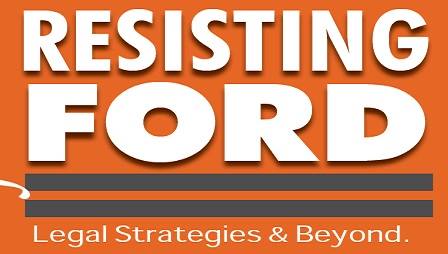 Childcare from 1PM-6PM. Activities for children available during AGM (7:00-8:30PM)