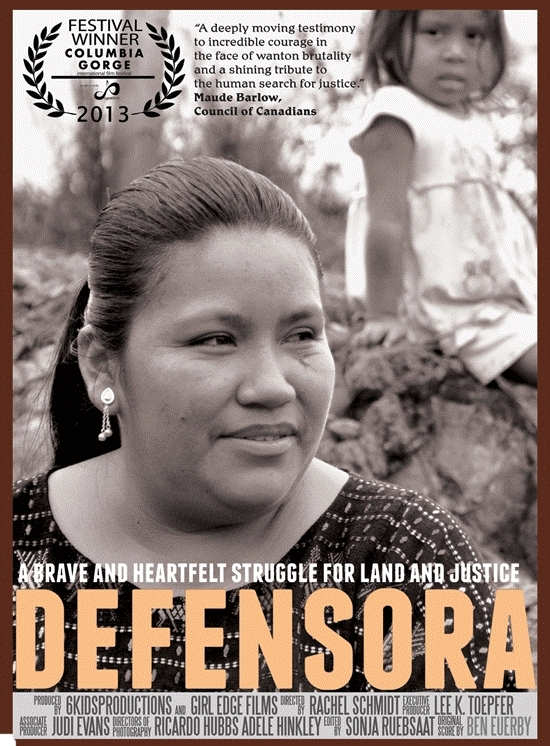 22 Jan 2015 • Categories: Uncategorized •
DEFENSORA
“Defensora is a deeply moving testimony to incredible courage in the face
of wanton brutality and a shining tribute to the human search for justice.”
(Maude Barlow, Council of Canadians)

Followed by a discussion with:

Defensora is a documentary about a Mayan Q’eqchi’ resistance against mining in Guatemala. The story is set along the shores of Lake Izabal in the community of El Estor where a nickel mining company has operated for over 50 years. Tensions run high against a backdrop of pro and anti-mining camps, violence and forced evictions. The film takes audiences into the lives of defenders in the resistance who struggle to reclaim their ancestral lands and seek justice in Canadian courts for alleged human rights violations.

DEFENSORA documents the historic and on-going land and community defense struggles of Mayan Q’eqchi communities in eastern Guatemala, and their struggle for justice and remedy in Canadian courts against the nickel mining company Hudbay Minerals.

Defensora follows the story of sisters Maria and Angelica Choc, who lead a
Mayan Q’eqchi resistance in Guatemala to reclaim ancestral lands and seek justice
in Canada for the murder of Angelica’s husband, the shooting-paralyzing of
German Choc Chub and the gang rapes of 11 Mayan women.

Set along the shores of Lake Izabal, where tensions run high against a backdrop
and history of violence, intimidation and forced evictions, the stakes are high for the
Mayan Q’eqchi people who risk their lives to protect their lands, speak the truth and
seek justice in Canadian courts, and for Hudbay Minerals that continues to deny their allegations.

“Defensora is a timely documentary that provides candid insights into the
brave struggles of Angélica, German and other Maya Q’eqchi’ women and men
in El Estor, Guatemala who, faced with the grave harm that Canadian
mining operations have brought about, are on the frontline of the battle
for justice in Canadian courts.” (Jen Moore, MiningWatch Canada)
__________________________________________
For more information:
Visit http://www.cinemapolitica.org/danforth
or http://www.torontodanforthndp.com
Check out ‘Cinema Politica (Toronto-Danforth)’ on Facebook.
Call David Langille – langille@yorku.ca or 647 280 7747