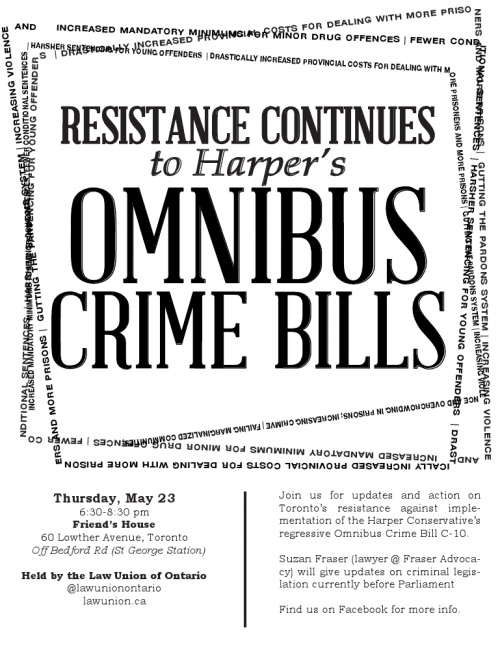 Harper is not done: Bill C-54, currently before Parliament, could drastically increase the length of detention for those found “not criminally responsible.”

On January 17th, the Law Union of Ontario hosted a community meeting to brainstorm ways to prevent the implementation of the omnibus crime bill and stop Harper’s unjust law and order agenda.

Please join up for an important follow-up meeting, for updates and action to further the resistance.

Suzan Fraser (lawyer): an update on Bill C-54, and its implications for prisoners.

There will time to work together to brainstorm next steps.

ASL and child care will be available. Please email esmondej@hotmail.com by May 17th if you require these services.

Call to Action: May Day March on May 1st

The Law Union of Ontario is calling upon its members and allies to march in solidarity with
workers for May Day 2013 on Wednesday May 1st at 5:30 pm at Toronto City Hall.

The plenary session, titled “Panels Full of Women” has been accredited by the Law Society for 1.5 Professionalism Hours, while the remainder of the agenda is eligible up to 5.75 Substantive Hours.

Conference attendees are reminded to keep a token attesting to their attendance at the Conference (whether it be a receipt, a conference program, or a registration confirmation email) in the event that their CPD hours declaration is audited by the Law Society.

ANNUAL CONFERENCE OF THE LAW UNION OF ONTARIO: March 16, 2013

LOOKING FORWARD, LOOKING BACK: 40 YEARS OF RESISTANCE
Annual Conference of the Law Union of Ontario 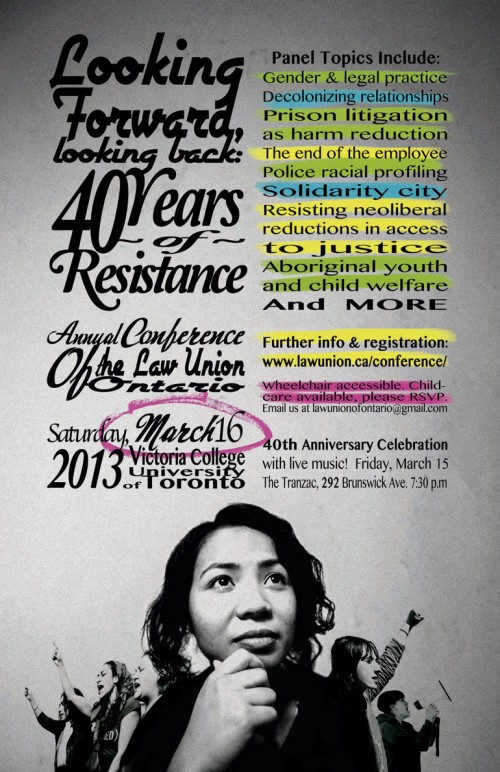 Join us on Saturday, March 16, 2013, for the Law Union of Ontario’s Annual Conference! 2013 marks the 40th anniversary of the Law Union, and this year’s conference will bring progressive legal and activist communities together to discuss an exciting and challenging series of issues.

The conference will be held at Victoria College, on the University of Toronto campus. The address is 91 Charles Street, with the building just south of Charles. This facility is wheelchair accessible. Follow this link for a map of the exact location of the conference: http://map.utoronto.ca/building/501

Scroll down for the full schedule of panels and speakers.

This program has been accredited by the Law Society for 1.5 Professionalism Hour(s) and up to 5.75 Substantive Hours.

In honour of the Law Union’s 40th anniversary, join other conference-goers on the evening of Friday, March 15th, for a celebration with live music, drinks, reflections, and awards. This event will be held at the Tranzac, 292 Brunswick Avenue, Toronto, from 7:30 pm onwards. All are welcome!

Deconstructing the Doctrine of Discovery
Tannis Nielsen, Artist and Educator

Childcare will be provided – please email us in advance at lawunionofontario@gmail.com with the number and ages of the children who will be attending.

If you would like to donate to the conference, you may do so through
the Jur-Ed Foundation at Canada Helps

Questions? Email us at lawunionofontario@gmail.com, and include “conference” in the subject heading.